Please note this information is from the 2019 event although the dates are correct for 2022. Please return 3-4 weeks prior to the event when we post information for the 2022 event. 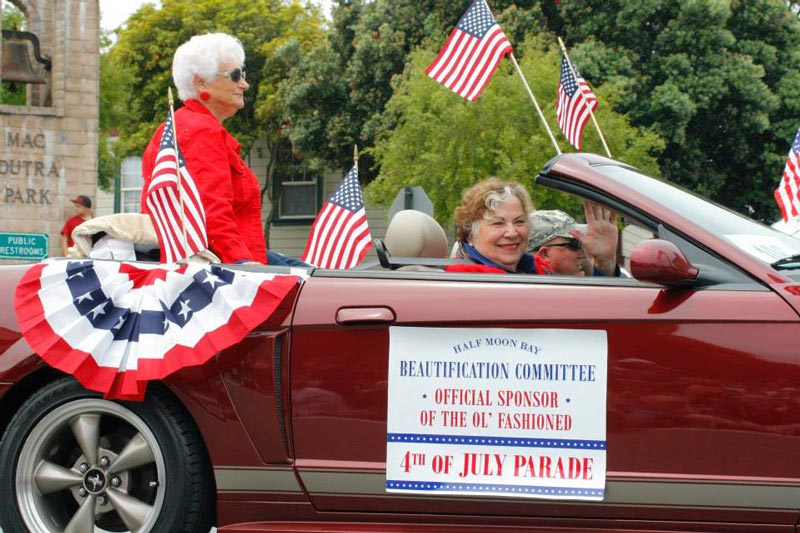 This year’s beloved parade is back on with plans to make an even bigger bang.

To honor and celebrate her 90th birthday, beloved community icon, Matriarch of Main Street, longtime (now former) owner of Half Moon Bay institution Cunha’s Country Store and the only remaining founding member of the Pumpkin Festival, Bev Ashcraft, will serve as Grand Marshal of the Ol’ Fashioned 4th of July Parade.

“No one has done more for the City of Half Moon Bay and particularly Main Street than Bev Ashcraft and no one is more loved,” said Cameron Palmer, Parade Co-Chair. “Having Bev as our Grand Marshall is the perfect marriage. Like Bev, the Ol' Fashioned 4th of July Parade is a revered, time-honored institution in our community that everyone cherishes. It’s an honor and privilege for us to celebrate Bev at this year’s parade as we celebrate an extra special day of our community gathered 'So Happy Together'," said Palmer.

Honoring Half Moon Bay’s western heritage and always a parade highlight, there will be a large number of equine entries.

For many locals, it’s one of their favorite events of the year.

The parade starts at 12pm, transforming the charming downtown along Main Street into a pulsating Coastsider take on a mini-Mardi Gras style celebration.

There will be no judging of parade entries this year; simply a celebration of community.

WHEN:  Parade starts at 12 noon and lasts approximately one hour.

WHERE:  On Main Street in Half Moon Bay, CA.

Get Social With Us!